Speaking Your Truth Even When It Feels Painful and Shameful 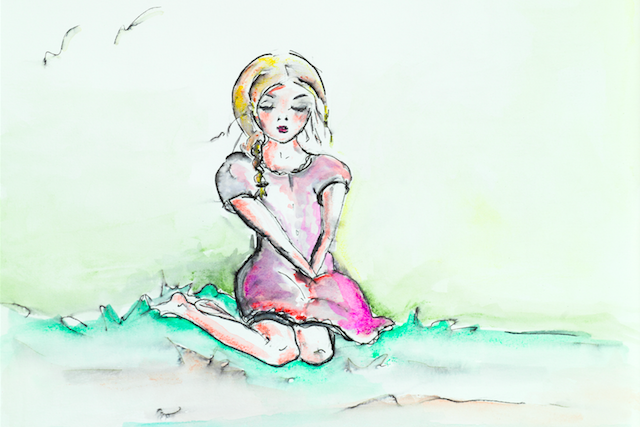 I was sexually assaulted during my senior year of college. Shortly after, I received a hefty check in the mail from the guy who did it as a “graduation gift.” I spent many nights tossing and turning, debating whether I should cash the check or burn it along with his pathetic graduation card wishing me “all the best” in my future.

I ended up cashing the check and pretending it didn’t happen.

This was four years ago, and I still cringe every time I think about what happened—and even worse, what didn’t. I lose sleep over all the things I didn’t say, the action I didn’t take, the people I didn’t talk to afterward. In the end, what didn’t happen is even worse than what did.

I visited my grandmother recently, and we were sharing stories about her career as an educator for many years. In the midst of our conversation, the “#metoo” topic came up, as it was all over the news at the time.

She shared with me that in all her years in a supervisory role in the school system, there were two occasions where students reported that their teacher sexually assaulted them.

After the investigations, my grandmother and her staff discharged these teachers from the school district but chose not to press charges against them. Maybe there wasn’t enough evidence to take legal action. Maybe the times were just different back then. But as she told me all of this, I couldn’t help but notice the subtle trace of regret in her eyes. She gazed out the kitchen window and said, “I wonder whatever happened to those teachers.”

It bothered me for weeks after our conversation. What had happened to the teachers that were dismissed, all those years ago? Did they get another job? Did they move to a new state? Did they ever start teaching again, this time in a different school district, with new students and a clear slate?

Were they guilty of what those students claimed? Did they, in fact, cross a line? Or were they simply being blamed for something that wasn’t their fault at all—a scapegoat for issues happening to the students outside their classroom?

Who knows? Who knows what might have happened, or how those two events that occurred so many years ago might have created a ripple effect out into the world today?

Every action has a consequence, no matter how big or small. But I couldn’t stop wondering, how did those students move forward from that point on? What beliefs did they adopt about themselves, about authority figures, about life in general, after an experience like that?

How did the accused teachers wake up in the morning, after such a wicked allegation? Did they tell their friends and family the truth? Did they work tirelessly to become better people, so as to avoid anything like that ever happening again? Or did they go on to assault more children in different schools?

The questions made my mind numb. The possibilities were so varying, so unknown, and yet, so impactful. I couldn’t understand why it was bothering me so much when I personally played no part in this story.

But now, I’m starting to see the correlation. I’m starting to understand how all of these stories are connected, how our human narratives string together to create significance and meaning, and how it’s so incredibly important to honor and speak our truth. Especially when it comes to things like sexual assault, violence, and power.

Looking back to my sexual assault experience, I recognize that I felt more guilt and shame about the action that I didn’t take than anything that did happen that night.

For years, I beat myself up over the fact that I accepted the gifted money as some weird form of apology instead of telling anyone about what happened that night or allowing myself to actually process the emotions behind the event. I simply pretended it didn’t happen and tried to ignore the problem because I didn’t want to deal with the consequences of what might happen if I did tell anyone about it.

It felt safer to ignore the issue than to bring it to the surface, as if by talking about it I’d somehow make it more real, and if I could just pretend it didn’t exist, it would go away on its own.

Four years later, I can confidently say that it did not go away. The pain, guilt, shame, and regret from that one night of my life has exponentially grown, and I am just now feeling strong and brave enough to release it.

In several of his lectures and writings, psychologist Jordan Peterson references a children’s book that skillfully demonstrates the point I’m trying to make. It’s called There’s No Such Thing as a Dragon.

In this story, young Billy Bixbee finds a small dragon in his bedroom. When he tells his mother about it, she says, “There’s no such thing as a dragon!” and the two continue to ignore the dragon’s presence as it grows bigger and bigger and bigger.

Soon, the dragon takes up the entire house, but his mother continues to repeat, “There’s no such thing as a dragon!” She doesn’t acknowledge that the dragon exists until it gets so big that it carries their whole house away.

We pretend that problems like sexual assault, racism, bullying, and other injustices aren’t there, because it’s often so much easier to ignore them than to actually speak up about what we know to be true.

But the issue is that when we silence our truth or when we hold ourselves back from speaking up about these problems, we create an even larger, more harmful issue.

When you hold yourself back from speaking up about something that is wrong, you allow that thing to take on a life-force of its own. You give it more power. You let it continue to bully, rape, steal, lie, put down, hurt, torture, and commit painful acts, to you or to others.

That’s how evil spreads: through the subtle ignorance and repression of those who experience it first-hand.

That’s how people who commit sexual assault move from victim to victim undetected.

That’s how kids who are bullied over and over again show up one day on campus with a gun and massacre their classmates.

Because regular people, like you and me, decided to keep our mouths shut when we knew better.

I want you to know that no matter what happened to you, you are not alone. Terrible acts are committed every day, all around the world. There are dragons everywhere. That doesn’t take away from the fact that there is beauty and abundance and love everywhere, too. You just have to know where to look, and to constantly turn your attention toward the things that make you feel light.

I also want you to know that it wasn’t your fault. I blamed myself for a long time and felt like I was personally responsible for what my assaulter did to me, constantly questioning how things might have been different if I had made better choices that night.

The thing about the past is that everyone, including those who commit acts of violence or evil, is doing the best he/she can with the tools that he/she has available to them at the time. Does that make it right or wrong? No. It simply means that you can’t go back and change what happened in the past, so you have to find a way to forgive yourself for any blame or guilt you feel about it now.

Every action has a consequence. Part of being a conscious being includes taking the personal responsibility for those actions, which includes inaction.

When we ignore a problem or make excuses as to why someone’s behavior is acceptable, when deep down we know it’s not, we make a choice to allow it to happen again.

When we shove something under the carpet and pretend it doesn’t exist, we allow it to grow and gain power over us, until it becomes so big that many others get hurt.

So start now. Start today. Look around your life and question, what injustices are taking place? What am I tolerating, from myself or others, that I know is harmful? What have I allowed to happen to me or others that isn’t deserved? What truth have I been keeping tucked away from the world? What can I do differently from this moment forward?

Our stories are connected. Our pain, and our healing, is one. The more we speak up and share what impacts us, the higher we all rise.

If I could go back to my senior-year college self, I’d sit her down and let her know that it’s okay. That none of it was her fault, that she didn’t do anything wrong. And then I’d give her a pen and a paper and I’d tell her to write, like the whole world’s healing depended on it.

Lauren is a life coach, blogger, and yoga teacher in Phoenix, AZ. She’s actively creating a life that lights her up from the inside out, and helping her clients to do the same! She also has a serious coffee addiction. Check out her blog at laurenmaddencoaching.com.

The post Speaking Your Truth Even When It Feels Painful and Shameful appeared first on Tiny Buddha.