What My Dog Taught Me About Self-Acceptance 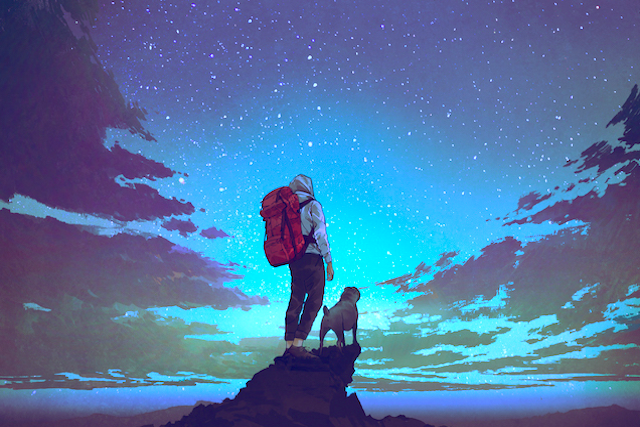 “Because one accepts oneself, the whole world accepts him or her.” ~Lao Tzu

We all have recorded messages playing in our heads, from long ago.

Listen to parents talking to young children. Often the message is less than approving.

“Don’t put that in your mouth!”

“Look at Cindy, how well she’s doing. If you worked harder you could do as well as her.”

Those examples are kind compared to what many people will have heard growing up.

Many of these messages enter our brains before our conscious memories are fully formed. They may be buried somewhere in our minds, but they are real.

Of course, parents have to train young children. That’s part of their job. But not all parents balance their criticism with approval.

So, we often grow up anxious for approval, uncertain of our own worth, always feeling that there’s something fundamentally wrong with us, perhaps feeling more or less unlovable.

This self-critical stance interferes with the warm, loving, mutually accepting, and deeply satisfying relationships we crave all through life.

Are relationships really that important? The Harvard Study of Adult Development followed people for as long as seventy years. Some thrived, some sank.

What was the common factor among those who flourished for decades, in every way? Warm, supportive relationships.

I sucked at relationships as a child. I don’t mean romantic relationships, just friendships. I was the awkward kid who got left out of playground games.

Yet, there was a part of my life that was quite different. It was full of love and joy.

Let me tell you about Jolly.

Jolly was about two feet tall, hairy, with patches of brown, black, and white. For me, it was love at first sight. He was bouncing around frantically, his tail wagging so furiously that it might have fallen off.

I pestered my parents until they agreed to get him for me.

In no time at all, I was experiencing why dogs are called our best friends. Jolly was completely in love with me, judging by his behavior.

If the day had been particularly frustrating for me, Jolly didn’t care. He’d jump on me as soon as I came in the door, tail wagging at dangerous speeds, squealing with delight, trying to lick my face, running up and down the room before repeating the performance, barking with joy, inviting me to play with him.

Sometimes a teacher would tell me off in school.

Jolly didn’t care. To him, I was still the most wonderful person in the world. He would still burst with joy when I got home, bury me in licks, desperate for me to play with him.

Sometimes I would return feeling really low because other kids had been particularly nasty to me.

Jolly would still jump on me when I opened the door. He would still wag that tail dangerously fast. If he could talk, I believe he would be spewing out love poetry to rival Shakespeare.

I didn’t even have to go out of the house for him to find me fascinating and totally lovable. It was enough if I went to the next room and came back. He would still be almost bursting out of his skin with joy at seeing me again.

It was as if he could see something in me that I could not see for myself.

However, it took me decades to digest and fully accept the lesson that Jolly was teaching me.

Medical school taught me the neurological pathways and brain areas that are active during criticism, but I didn’t fully embrace Jolly’s message until some decades later.

For many parents, and for the world, success in life is something that happens in the future of a child. The child grinds out one day after another, chasing that distant glimmer of success.

The young adult grows toward middle age, perhaps with children by now, and still they’re chasing success. For themselves and now for their children too.

No matter how much they’ve accumulated, there’s always the possibility of accumulating more. Keeping up with the Joneses is an endless game. At the root of it all is the little child’s longing for approval.

“If they really knew me they wouldn’t like me.”

“If only I could get that next promotion or close that big sale, people would start respecting me more.”

“If only I did better, I would become truly lovable.”

Scratch under the surface, and there might well be a self-critical little child longing for acceptance.

We experience the stresses and strains of life as burdens that drag us down.

We get annoyed at ourselves for not doing better.

We beat ourselves up for experiencing difficult or unpleasant emotions.

We’re hooked on self-help books and programs because we’re anxious about our flaws.

We long to be rid of our flaws and imperfections, because we believe that will make us more lovable.

What would Jolly say?

“I don’t care. Yes, you need to lose thirty pounds, but right now I love you and want you to know that you are completely worthy of my love.”

“Yes, you could do with twice as much money and a much bigger house, but right now you are already totally lovable.”

“Yes, you could do with fewer of those low moods, less anxiety and less anger, but right now you are already worthy of honor and respect.”

“Yes, you’ve had some messy relationships and screwed up in many ways but right now you are totally worthy of love.”

The more I learned to accept myself with all my flaws and imperfections, the more relaxed I became about difficult emotions and setbacks in life.

The more accepting and loving I became toward others, the more they responded with warmth.

The child that was left out on the playground is now a much more self-accepting person despite his flaws, often a source of love, comfort, laughter, and joy to others. That is fertile soil for warm, supportive relationships.

Supportive relationships, as research has found, are the key to wellbeing now and for decades to come. They help keep your body and brain working well for longer.

At our core, we’re a mess and we’re always falling short of our aspirations. That’s part of being human. It’s okay.

Jolly would want you to know that you are totally lovable, regardless.

Joel Almeida PhD mentors busy doctors and other professionals to protect the one thing that makes all of life better: their brain. His science-based Brain Care guide reveals 10 one-minute practices for better brain health at any age, with more peace and joy now and lowered risk of Alzheimer’s. Now you, too, can get the guide (free today).

The post What My Dog Taught Me About Self-Acceptance appeared first on Tiny Buddha.