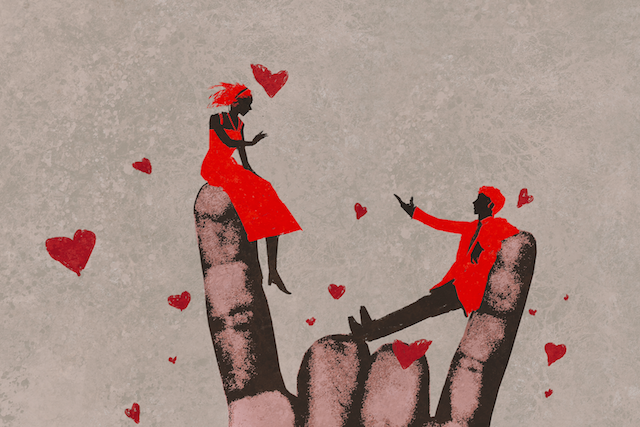 Dave and I met earlier this January. I was immediately attracted to his aquamarine eyes and his tattoos. I met him on the eve of my twenty-sixth birthday and, based on our interaction, I assumed we’d have a casual fling. Things didn’t end that simply, to my surprise.

When we were lying in bed together that first night, holding hands, he turned to me and asked if there was any chance we could get to know one another without sleeping with other people.

This was strange to hear, but as a single woman in Los Angeles, I felt as though I had stumbled across some sort of rare species of man who was actually interested in pursuing a commitment without me having to do much.

A part of me felt caught off guard and suspicious, considering I’d made it clear that this was just supposed to be a hook up. On the other hand, it was kind of nice that someone who I was incredibly attracted to wanted to get to know me exclusively. In retrospect, I realized that it filled me with this feeling of warmth that I’d been deprived of before I’d met him.

Within five days, Dave asked me to be his girlfriend. Although I found his eagerness to jump into a relationship to be a bit off, I agreed because I liked him and wanted to go with the flow.

The first few weeks were amazing, as we shared intimate conversations, romantic outings in Los Angeles, amazing sex, gifts, and the beginning of what felt like something that could blossom into a true partnership. However, the passion was intense, and we hadn’t had much time to develop authentic trust. It became increasingly evident to me that this relationship would be a ticking time bomb.

Within a month and a half, I was overwhelmed with Dave’s jealousy, suspiciousness, and paranoia. He was becoming increasingly controlling and accusatory toward me.

I was incredibly loyal to him and began to resent feeling like I was always doing something wrong when I was trying my best to be a good girlfriend. His gifts started to seem like a farce—like he had simply gotten me them to possess me instead of genuinely liking me for who I was.

I broke up with him a few times because I couldn’t tolerate his jealousy and the way he degraded me. However, I would go back to him because I’d remember the good times and was becoming addicted to the kind of intensity he provided for me.

I would question myself and think perhaps I was being too critical; after all, no one was perfect, and I should be flattered that someone was evidently so invested in me. I was in it too deep to see things clearly and make the right decision.

When he and I would split, I’d attempt to get out there and date others, but no one was able to elicit the same warmth and stimulation I’d felt from him. So I’d go back to him. Just three months into this, we’d already established an on-and-off relationship that began to deteriorate my mental, emotional, and physical health.

The fourth and final time we broke up ended with him yelling at me in public. I had wanted to leave a particular bar because I’d had an anxiety attack, and he accused me of wanting to exit because of “some guy” there. He was totally delusional. There was no guy in the bar I was trying to hide from him.

I remembered chasing Dave after he’d stormed out from the bar and thrown money at me, demanding I take a bus back to my house. I was actually crying on the street chasing him while he yelled at me! I hated myself and the woman I’d regressed to.

For comedic relief, there were two women watching us fight, standing outside a movie theater eating popcorn.

“Don’t chase him, girl,” they told me. “He’s mean. Look at how he’s yelling at you. You deserve better.” Dave cussed at the girls before running off. I stopped chasing him. I came to my senses. It was brutal, but I realized that this relationship just wasn’t worth all the pain anymore.

Why couldn’t I just walk away the first time I broke up with this guy? Why do we get hooked on the drama of on-and-off relationships? Here are some theories I’ve formed.

1. Life wasn’t much better before.

Looking back, I recognize that I wasn’t in a solid place in my life before I met Dave. I was bored and at a crossroads with my career. I was highly susceptible to getting caught up in something like this because I was unhappy with my life and the drama provided both stimulation and a nice distraction.

2. Pain felt familiar and comfortable to me.

Even though Dave had shown me his mean streak within a month of dating, I stuck with it thinking I deserved it and that I should endure it for the greater good. My parents often shamed, invalidated, and criticized me when I was growing up, and as an adult I’ve been attracted to partners who do the same.

3. I wasn’t clear on my deal breakers.

I knew I was turned off by extreme jealousy, but I didn’t know it was a deal breaker for me at the time. Now, looking back, the deal breaker I’ve settled on is being degraded or humiliated for someone else’s uncontrollable jealousy.

4. I developed an addiction to him and the drama.

I’d become addicted to Dave, the sex, and the whole act of reconciling. There’s something intoxicating about the highs that follow the lows. It’s a cycle many are familiar with, and I am one of the lucky ones that got out of this relationship before it became even more destructive.

Now that I’m armed with this knowledge, I’m going to focus on understanding and working on my masochistic behavior. I’m going to get more clarity on what my deal breakers are and make sure to end things once I feel someone isn’t respecting them.

Monica Viera is a novelist who lives in Los Angeles, California. She is best known for her novel Crazy Meeting You Here.

The post Why I Got Caught Up in the Drama of an On-and-Off Relationship appeared first on Tiny Buddha.